The world’s oldest and largest supplier of network-enabled sensors releases an updated range of temperature sensors. The NIST2 sensors feature 2x NIST traceable, calibrated temperature sensors and an internal calibration integrity check. NIST4 sensors feature 4x NIST traceable, calibrated sensors with internal calibration integrity check and failover. The NIST4 is priced $20 higher and suited to critical infrastructure monitoring where failover systems are required.
“If you care about monitoring, wouldn’t you like to know that your sensor is always calibrated?” said Brad Klein, Founder of AKCP.
The wired NIST2 and NIST4 sensors are compatible with the SPX+ series of base units. Up to 16 temperature sensors on a single SPX+. Multiple SPX+ base units are monitored through AKCPro Server.

Both the NIST2 and NIST4 sensors have internal calibration integrity checking. With this technology, the sensors operate in pairs, with the values compared once a second. If a difference greater than the stated tolerance of the sensor is detected, an alarm is raised to warn that the sensor is out of calibration. For a higher level of accuracy, an average of the sensor pairs is calculated. 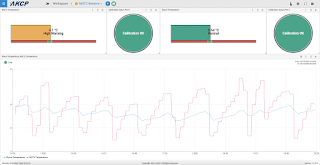 NIST4 sensors additionally include a failover function. 4x NIST traceable, calibrated sensors operate in 6 pairs. The average of each pair is calculated, and an average is taken of the 6 pairs. This results in a higher accuracy but also multiple failovers. When a pair is detected as being out of calibration, their values are ignored and an alarm raised. In the event of a failure, you have a continuous operation, graphing and monitoring of the environmental conditions.
All sensor data collected on the SPX+ is monitored via a network connection. An optional cellular data modem for remote locations and SMS alerts can be added. AKCP also offers a cloud monitoring service, or their central management platform, AKCPro Server.