AKCP, the world’s oldest and largest supplier of networked wired and wireless sensor solutions, has supplied a monitoring system for the UK Atomic Energy Authority (UKAEA) at their Culham Science Centre HQ in Oxfordshire. UKAEA are world leaders in developing fusion (the energy source of the stars) for future low carbon electricity, operating the EU’s Joint European Torus (JET) facility for the European fusion community.

UKAEA’s Electron Kinetics Group studies the action of electrons in the hot gases (or plasmas) of fuel produced at JET. AKCP environmental monitoring sensors are used to monitor the laboratory temperatures and relative humidity during their experiments.

Why is temperature monitoring important?

Measuring temperature on JET uses a technique known as Thomson Scattering. Detecting the scattered light when a laser beam interacts with an electron determines both temperature and density of thermonuclear electrons.

In JET experiments, the scattered light is detected by avalanche photodiodes (APDs). The detection efficiency of these diodes is very sensitive to temperature. They operate in a controlled environment, requiring temperature sensors to ensure maintenance of required temperature ranges.

Despite the controlled environment, it is not sufficient to guarantee accuracy. The bias voltage of the APDs is adjusted to compensate for temperature fluctuations. The voltage variation is at a rate of 2V/°C. The bias power supplies used are designed to achieve this automatically. As an insurance additional voltage sensors are required  to check the system functions as expected.

The ease of the AKCP system allowed the physicists to quickly build the monitoring solution they needed. sensorProbeX+ (SPX+) base units, with temperature sensors, digital voltmeters, Modbus over TCP/IP and centralized monitoring through AKCPro Server.

The 0.1°C resolution of the temperature sensors made them ideal for the measurements. The voltage monitoring required a specialized scientific grade sensor with high resolution. The ADAM 6017 from Advantech was deployed, with a 76uV resolution. Featuring Modbus TCP/IP, its data was brought into the SPX+ and AKCPro Server via virtual sensors.

Due to security restrictions photos within the labs are not permitted. AKCP was allowed to publish screenshots of the AKCPro Server to show the interaction between the AKCP sensors and the laboratory experiments.

To check the system functioned as expected, the experiment was conducted with room temperature set to 20°C, 19°C and 21°C. At each temperature the system was left for several hours for the photodiodes to reach an equilibrium temperature. The measurements were made by averaging the short-term fluctuations in both temperature and bias voltage. From this the temperature coefficient of the bias voltage was calculated. The results were within 10% of the expected values. 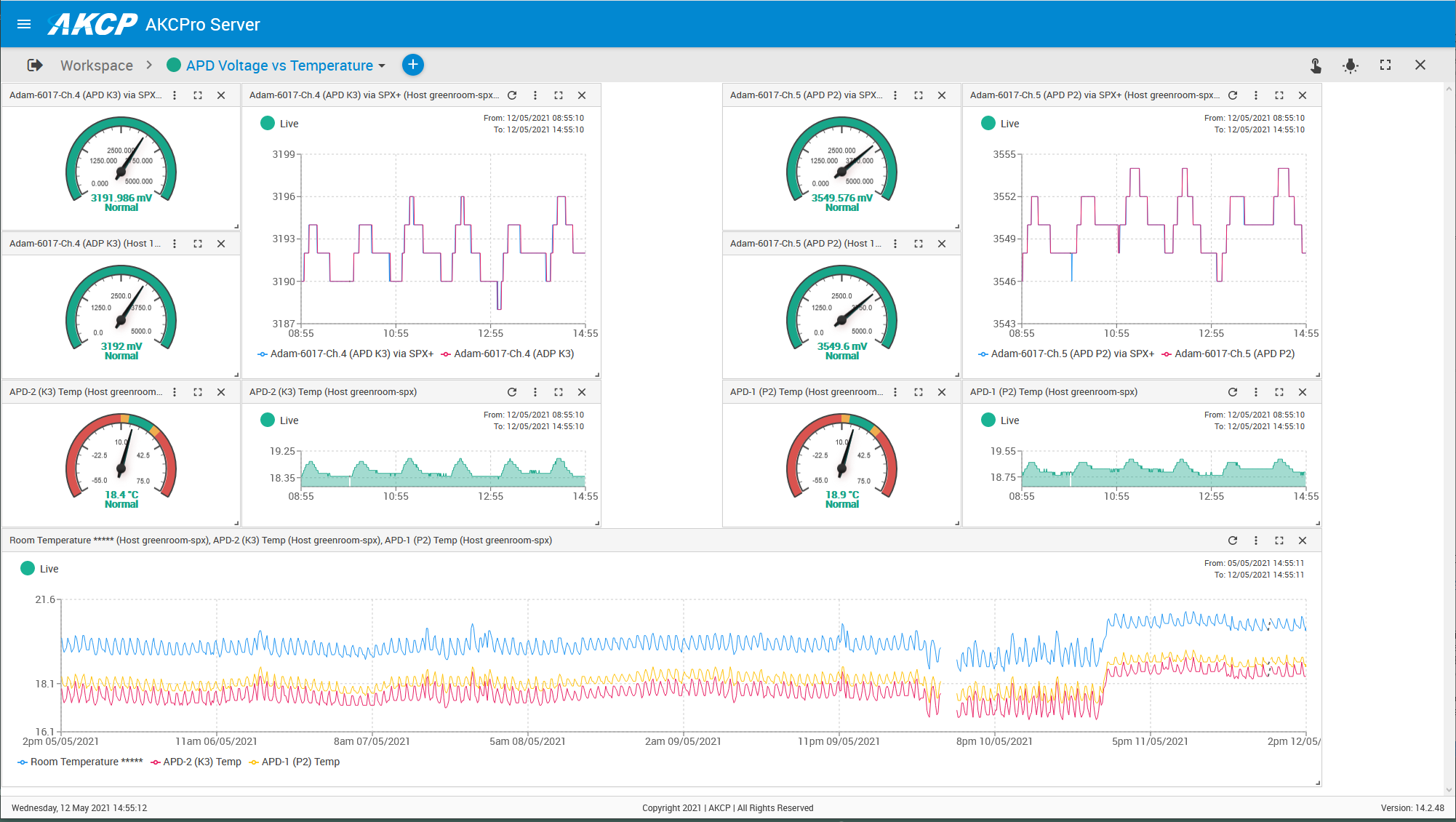 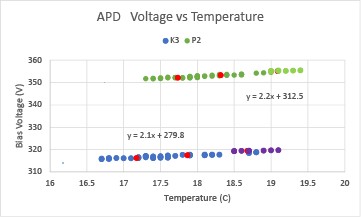 The power of the AKCPro Server virtual sensors were also leveraged to monitor a diverse array of equipment in the laboratory. Programmable relays, mass flow meters, and cryogenic level gauges were all interfaced via Modbus TCP/IP. Parameters monitored are :-

The use of AKCPro Server as a centralized monitoring platform means the physicists can not only monitor the experiment’s environmental parameters, but also provides a convenient way to oversee the complete lab operation. It also sends alerts via e-mail when parameters are outside of allowed boundaries.

Boolean logic in AKCPro Server logically combines the outputs from several of the temperature sensors. The output controls AKCP Sensor Controlled Relays. This allows for the switching off of equipment should it run too hot. The use of the Boolean logic means that several sensors must agree on this status before the shutdown is triggered. This lowers the amount of unnecessary downtime.

The project at UK Atomic Energy Authority was supplied through AKCP’s dealer in the UK, OpenXtra.

AKCP established in the USA in 1981, has 30+ years experience in professional sensor solutions. AKCP created the market for networked temperature, environmental and power monitoring in the data center. Today with over 150 employees and 200,000 installations, AKCP is the world’s oldest and largest manufacturer of networked wired and wireless sensor solutions.