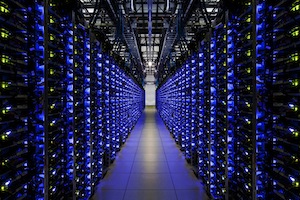 Blue LEDs on this row of servers tell us everything is running smoothly. We use LEDs because they are energy efficient, long lasting, and bright.

Google's servers are high-performance computers that run all the time. They're the core of our data centers, and we've designed them to use as little energy as possible. We do this by minimizing power loss and by removing unnecessary parts. We also ensure our servers use little energy when they're waiting for a task, rather than hogging power when there’s less computing work to be done.

We optimize the power path.

A typical server wastes up to a third of the energy it uses before any of that energy reaches the parts that do the actual computing. Servers lose the most energy at the power supply, which converts the AC voltage coming from a standard outlet to a set of low DC voltages. They then lose more at the voltage regulator, which further converts the power supply's output to the voltages required by microchips. Designed with low efficiency standards in order to save on initial cost, traditional servers end up costing much more in electricity in the long run.
Google servers are different. Since 2001, we've been designing them to be more efficient. For many years now, we've used very efficient power supplies. Similarly, we use highly efficient voltage regulator modules to ensure that most of the power goes to the components that do the actual computing work. We’ve cut out two of the AC/DC conversion stages by putting back-up batteries directly on the server racks. We estimate an annual savings of over 500 kWh per server—or 25%—over a typical system.

We customize our servers to stick with the essentials.

When it comes to hardware, we only use what's necessary for our applications to run. We remove unnecessary components like peripheral connectors and video cards. We also optimize our servers and racks to use minimal fan power. The fans spin just fast enough to keep our machines cool enough to run.
We encourage all of our suppliers to produce parts that operate efficiently whether they’re idle, operating at full capacity, or at lower usage levels—an idea we introduced as "energy proportionality" in 2007. Our study shows that more energy-proportional systems can cut total energy use in half at large data centers.